The original kayak, at the National Museum of Finland, measures 17'9" long and 17-11/16" wide. Its catalog number
is VK228 and it was likely collected in 1826 by Adolph Etholen. This is the second replica
of this kayak that I have made; The other is a half-size model. The lines of this kayak are published in "Kayaks of Alaska." 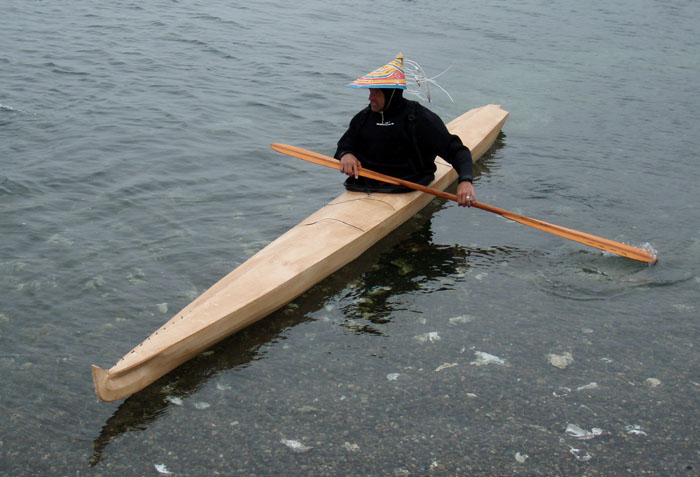 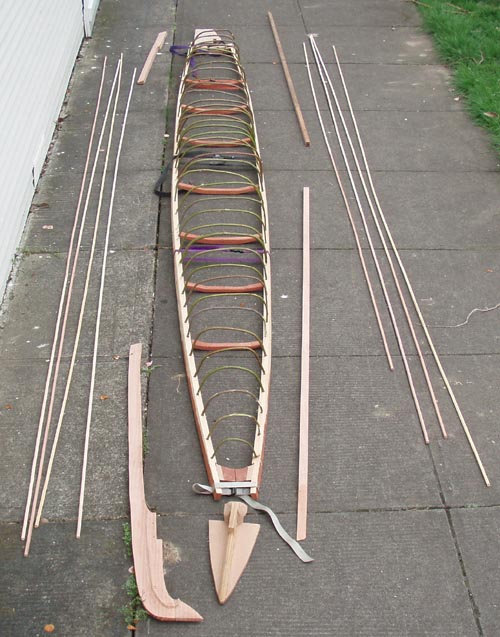 The wooden pieces of the kayak; missing is the central keelson, the coaming,
and its stanchions. The ribs are made from willow shoots. 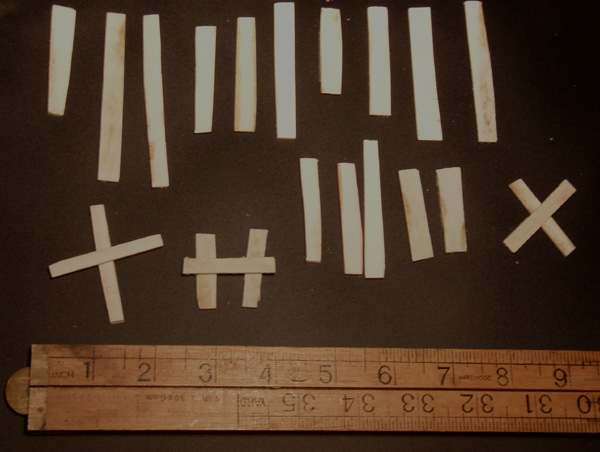 A selection of bone plates that will be set into the keelson joints, the gunwale-ends,
and the deck stringer-to-deck beam joints. The "T" arrangement depicts the deck stringer/deck beam orientation,
and the "H" arrangement shows the placement of the keelson joint pieces. All of the information regarding the placement of the bone
strips comes courtesy of George Dyson and X-rays he, Joseph Lubischer, and Chris Cunningham had made of the original kayak.
Dyson presented a paper that featured some of these X-rays in the magazine Scientific American ("The Aleutian Kayak", April, 2000, pp84-91). 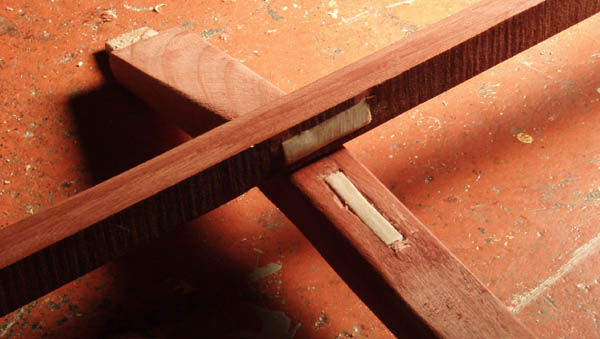 Bone plates as set between the top of the arched deck beams and the bottom edge of the central deck stringer. 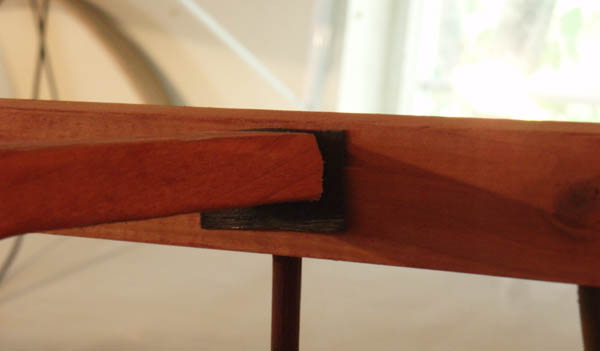 The original builder placed thin baleen plates where the deck beams are tenoned into the gunwales. This was not evident in the X-rays
of the original kayak, but was evident in photographs taken in the kayak's hull. On my replica, I used thin black plastic, which by all
appearances and properties seems to be very much like baleen. 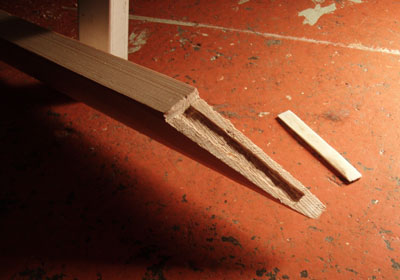 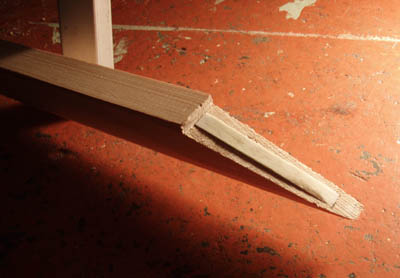 Placement of the bone strip on the ends of the central keelson. The inboard ends of the outer keelsons each have two pieces
of bone set transversely to 'wear' on the piece shown above. 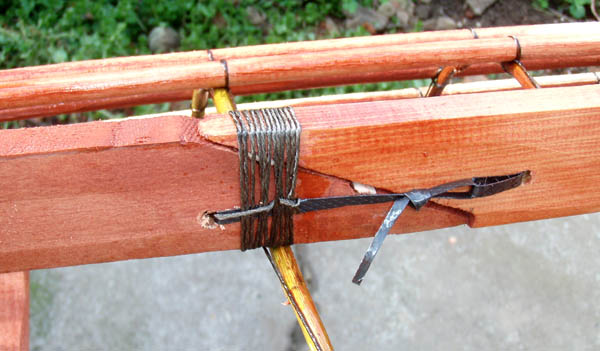 A lashed keelson joint-- one of two. The thicker fore-aft lashing is a "synthetic baleen," also known as plastic
banding. The circumfrential line is tarred nylon-- more of this line will be added to the scarf. Note the
ends of the transverse bone strips in the joint.

This view shows several aspects of the VK228's joinery: The bone plate on top of the deck beam, the "baleen" plate at the
gunwale-deck beam joint, and the full-length strip of "baleen" set on top of the keelson below the ribs. 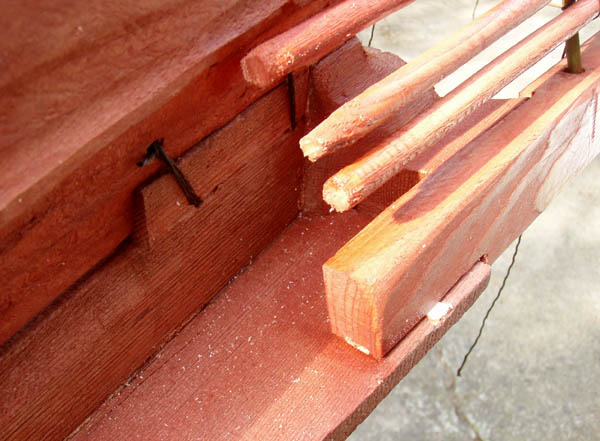 The bow plate again showing how the transverse bone strip is set to wear on a fore-aft strip on the gunwale ends. (Note the end of the
gunwale's bone strip barely visible at the gunwale end). This photograph show the arrangement upside-down).

Side view of the bow assembly. The transverse bone strip beneath the bow plate can be seen resting on the fore-aft bone
strip set into the gunwale's notched upper edge. (The deck stringer has not been attached yet). 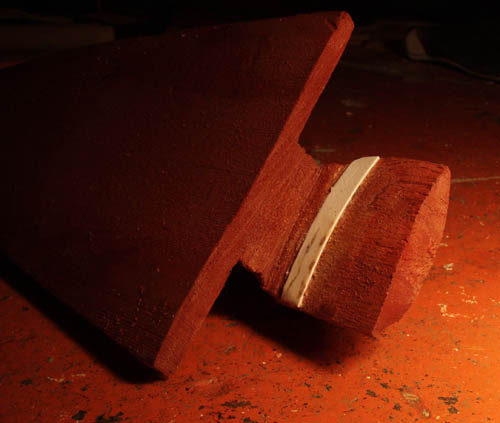 This photograph shows the bone strip on the bow block. This surface wears against the bottom of a
severed board set between the gunwales (see below). 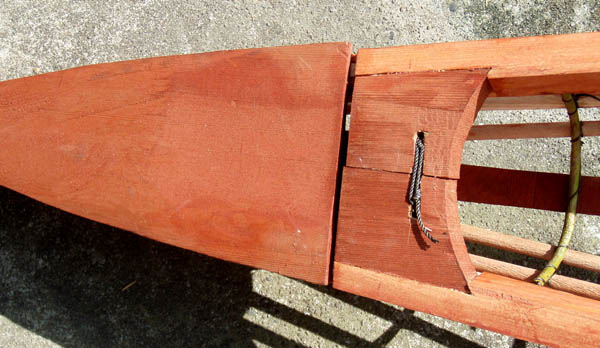 Topview of the bow assembly, showing the bow plate (left), and the severed board joining the gunwale ends. This
assembly is wracked slightly for the purpose of showing how the joints in the kayak may move. 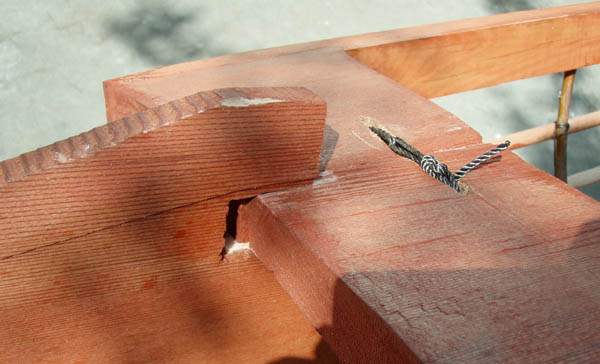 Bone strips are present in the stern 'fin' piece-- above and below the notch that receives the severed board
joining the stern gunwale ends. The bottom strip is evident in the lower left corner of the notch.

Detail of the completed bow assembly.

Detail of the completed stern assembly. 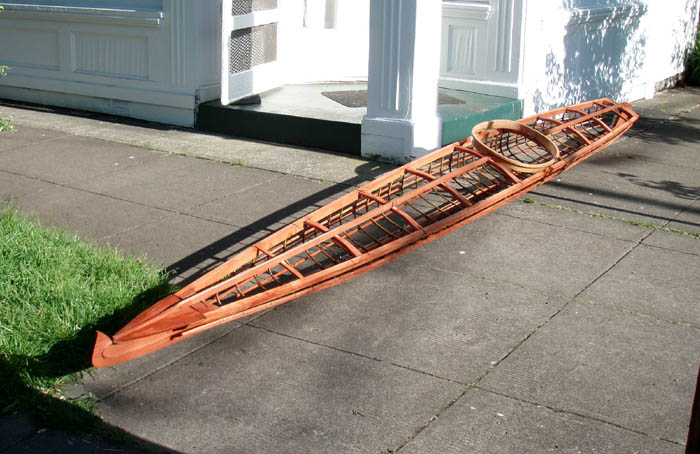 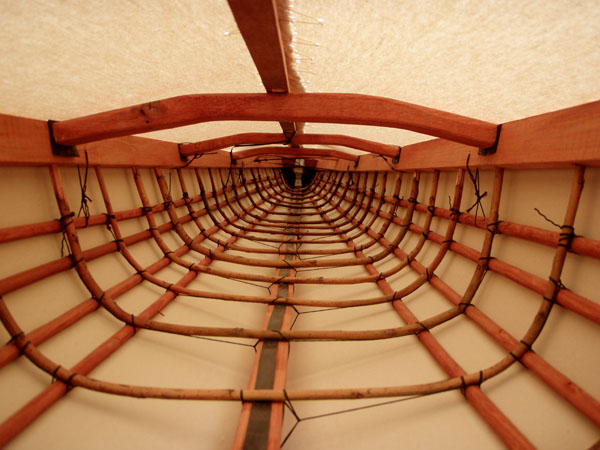 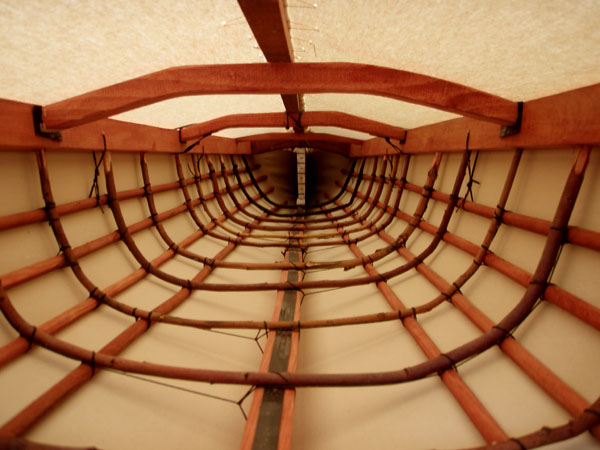 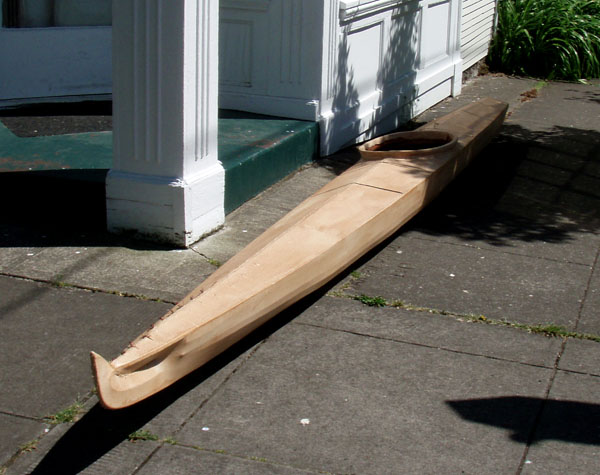 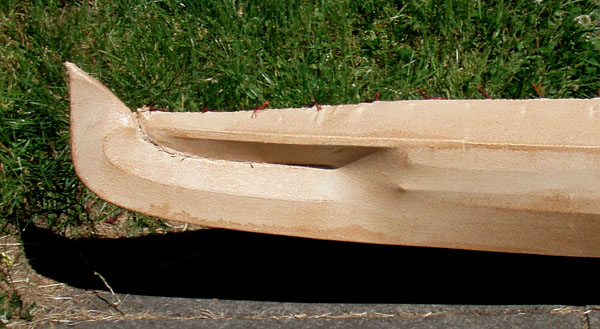 The covered bow: While the slot between the upper and lower portions is very narrow (even touching),
it is cut all the way through. 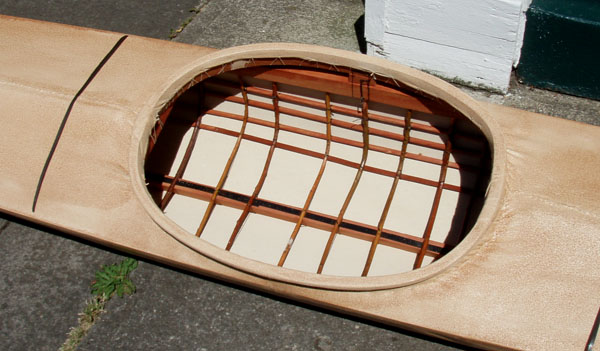 Cockpit view of the Baidarka. The original kayak was missing its decklines, but their placement was evident and
a similar kayak at the same museum had baleen decklines. The decklines on my replica are made from artificial baleen. 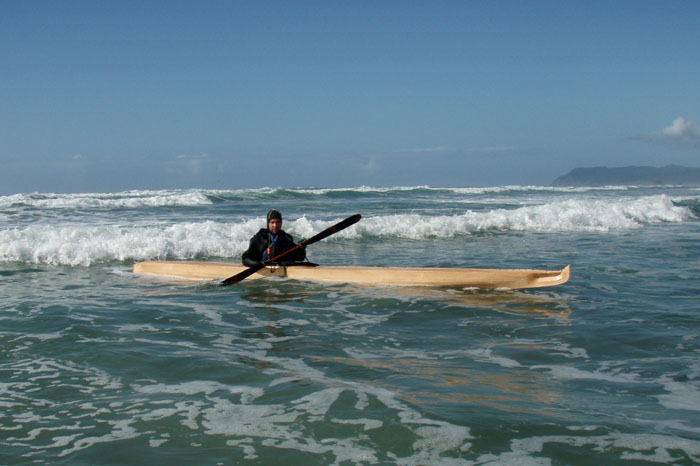 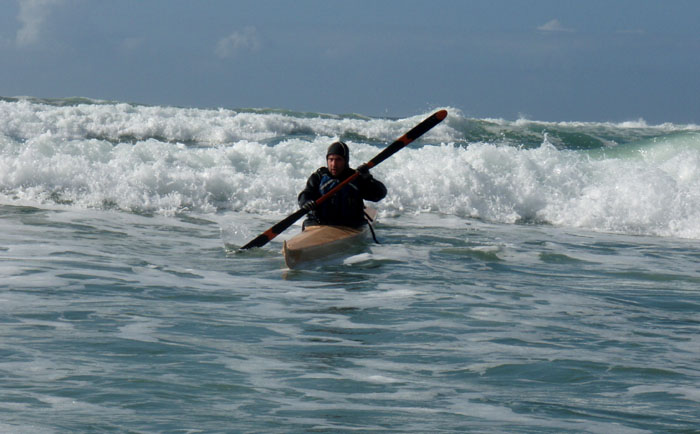 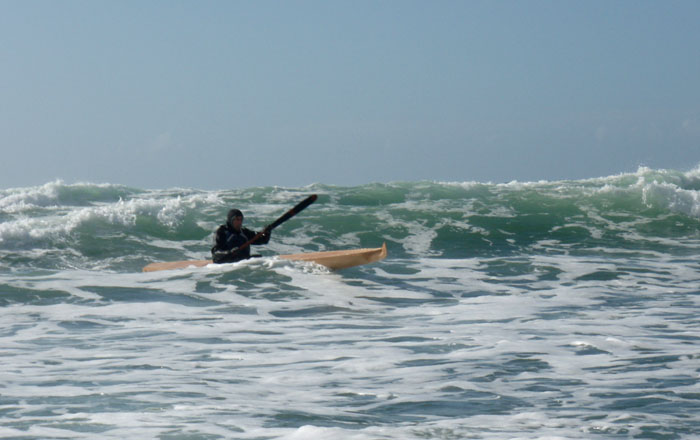 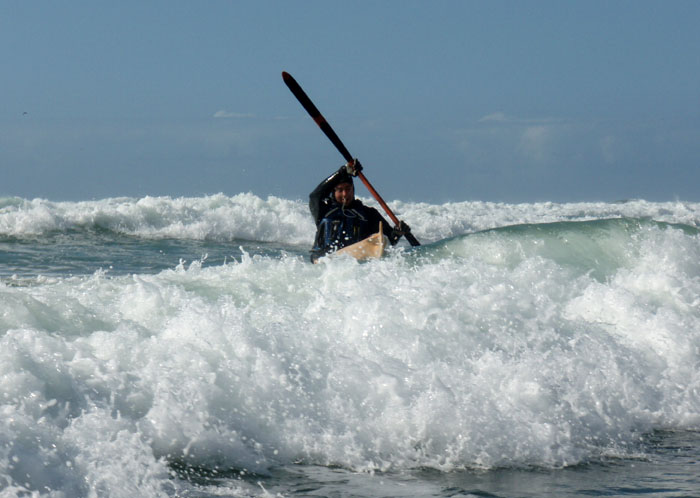